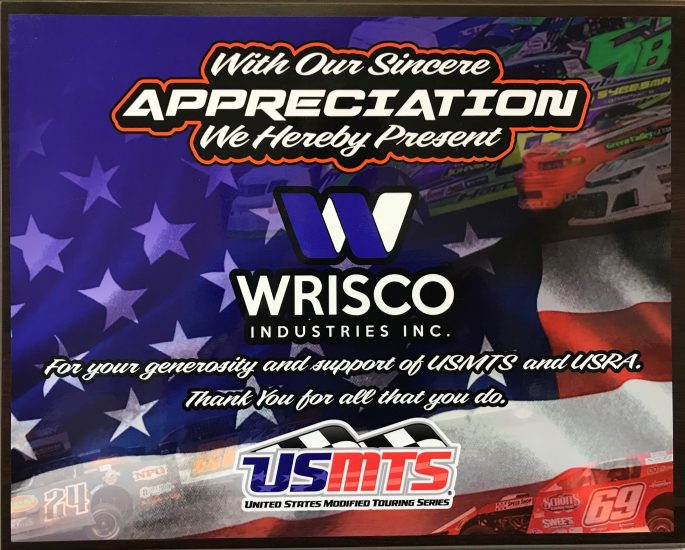 Thank you United States Modifies Touring Series for honoring Wrisco the USMTS Appreciation Award.  Wrisco is proud to be the “Official Aluminum Sponsor” of the USMTS!

The United States Modified Touring Series (USMTS) is the fastest growing and most popular open-wheel dirt modified touring series in the world. Attracting some of the most talented and professional drivers in North America, the fan friendly format and exciting show creates an enthusiastic and loyal fan base, and the USMTS routinely competes in front of capacity crowds.

With no less than 20,000 men and women competing nationwide on any given weekend, the modified is by far the most popular and most widely used type of racecar circling America’s dirt tracks today.

In addition, when it comes to a touring series that features the Best of the Best in dirt-modified racing, the USMTS has no equal.

Embarking on its 22nd season in 2020, the Summit USMTS National Championship fueled by Casey’s is the ultimate playground for the nation’s hottest drivers, and the USMTS rulebook allows for close competition and hopeful inclusion among local racers. More than 1,500 different drivers from 36 states have competed in USMTS events at 55 unique dirt tracks in 15 different states throughout America.  http://usmts.com/