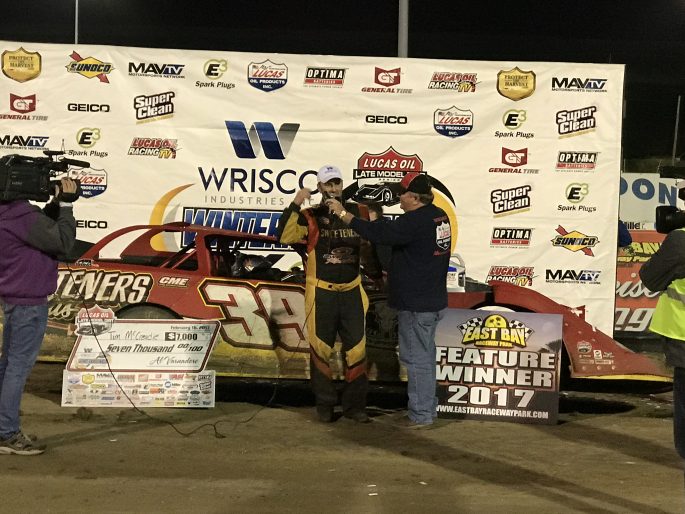 McCreadie drove the Sweeteners Plus, Pro Power Racing Engines, Longhorn Chassis to the lead around Don O’Neal on lap 24 using the top-side of the race track. He led the rest of the way to earn the victory. O’Neal’s Peak Antifreeze and Coolant, Cornett Racing Engines, Club 29 Race Car for Clint Bowyer Racing came across the line in second. Josh Richards was looking for this third win in five starts in the Best Performance Motorsports, Rocket Chassis but finished third, followed by Jimmy Owens in the Ramirez Motorsports, Rocket Chassis and David Breazeale in the Henderson Motorsports, Moyer Victory Race Car.

“I didn’t know where I was at before the yellow came out. I ran as hard as I could and we got there. I didn’t think our chances were very good to win tonight from where we started (outside row nine). We have struggled to get this car to qualify. Low and behold, I am good in these conditions,” said the driver who finished third in the 2016 LOLMDS Championship Points Standings.

McCreadie caught most the field by running the bottom of the racetrack, but after the last caution of the race with 22 laps to go, he went up and ran against the wall. “My best chance was to pack in all the crumbs up top under caution. I just kept packing them and packing them. I have lost a lot of races by not sticking in one lane or another.   Thanks to everyone back at the Labonte shop for the great car.”

Richards started out the race strong by leading the first four laps of the race, until 15-year-old Michael Lake stormed to the lead. After a restart following a caution flag, Richards could not get traction and lost several spots. Lake then took O’Neal with him as the two ran first and second for several laps.

Lake held the lead until O’Neal passed him for the top spot on lap 17. Kyle Bronson made his way to the front to challenge O’Neal for the lead.   McCreadie had climbed to third by lap 22 and then used a lap 24 restart to take the lead using the top groove on the race track.

O’Neal; a 15-time winner at East Bay; was making his first start of the week and came home in the runner-up position. “That was a good race. We had some problems on restarts, but overall, we have got a good hot-rod to finish out the week. The track was good down low and up high, but the middle was slicker there wasn’t as much traction. I am sure the fans got to see quite a race.”

Richards charged back to earn a podium finish and was glad to be back in the hunt at the end. “That was a great race by all of the teams. We got off to a great start and then things just went away. I don’t know how far we dropped back, but it was several spots. The car finally came around in the last ten laps or so and we were lucky to get back to third. Congrats to Timmy on the win.”